The first Catholic church to be built in the Polmont area after the Reformation was built in the in 1898. It was built as a chapel-school --- used as a church on Sundays and as a school during the week. At that time the Church had to build and maintain its own schools and it was fairly common at that time to have such chapel-schools. It was not until 1918 that the Church won the right in law to be treated fairly and have its schools maintained by the local authorities. And later still a successful appeal to the House of Lords won the right to have new Catholic schools built and maintained by the local authorities. In 1918 the church in Rumford ceased to be a chapel-school. The children now attend  and share St Andrews School, built on the east side of 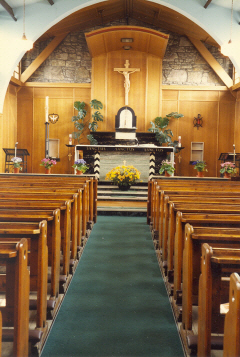 After the building of the church it was served by the priests of St Francis Xaviers, who often arrived on Sundays on horseback. It was not until 1913 that Polmont became a parish in its own right and the first parish priest was Father William Grant. The new parish embraced the villages in the Braes Area of Falkirk: Polmont, Brightons, Rumford, Maddiston, Whitecross, , , Shieldhill, Reddingmuirhead, Wallacestone, , Westquarter and later 1926 Standburn which formerly belonged to Slamannan parish which was closed in 1926 only to be reopened in 1938--- but Standburn remained part of Polmont parish.

At the time the parish was founded these villages were thriving mining villages separated from each other by open land. Now due mainly to housing development they are mostly conjoined and it is difficult to know where one ends and the other begins.

Fr. Grant was succeeded as parish priest in 1923 by Fr. Edward Morrison who in turn was succeeded by Fr Philip Murphy in 1926 and in 1929 by Fr D. P. Egan and in 1930 by Fr. Thomas McGarvey. Until then the priests were living in rented accommodation. However in 1931 Fr. McGarvey built the chapel-house in Rumford a few hundred yards from the church on what was previously a curling-pond --- the site costing the handsome sum of £43.00 and a few shillings. Fr McGarvey was succeeded in 1936 by Fr. Thomas McCann who was parish priest until he died in 1975 when he was succeeded by Fr Thomas Hanlon in July of that year.

From 1946 there had been a succession of curates in St Anthonys as the parish continued to grow in numbers. However due to the increasing shortage of priests in the Archdiocese of St Andrew and Edinburgh the curate was withdrawn in 1975 and not replaced.

By then the church was too small to accommodate the numbers attending mass on Sundays and five masses had to be provided at weekends. The church could only accommodate about 120 maximum and so it was decided that a new and larger church was necessary. This was built an opened on 2nd July l985 by the late Cardinal Gray, Archbishop of St Andrews and Edinburgh --- the last of 40 churches which he opened in the archdiocese before he retired 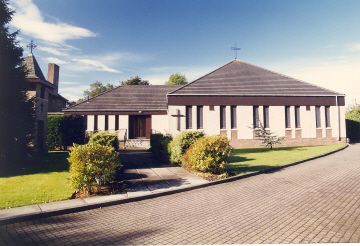 The church is a timber-frame building accommodating a congregation of up to 350. The seating was made by a parishioner John Young who only charged for the wood and the plumbing was done by volunteers from the parish charging only for the materials. 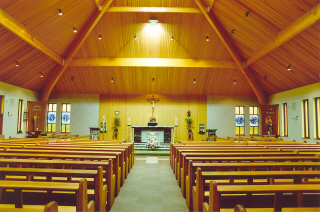 In 1990 a new hall was built adjacent to the church replacing the old wooden hall next to the old church.

Shortly later the bell tower in front of the church was built to house the bell from the old church which had been commissioned and erected in 1919 in memory of those parishioners who had  given their lives in the Great War of 1914 - 1918. 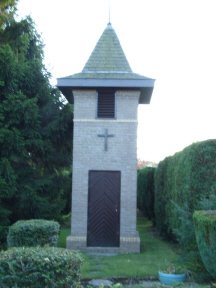 So now St Anthonys is a very compact unit with everything on the same site.